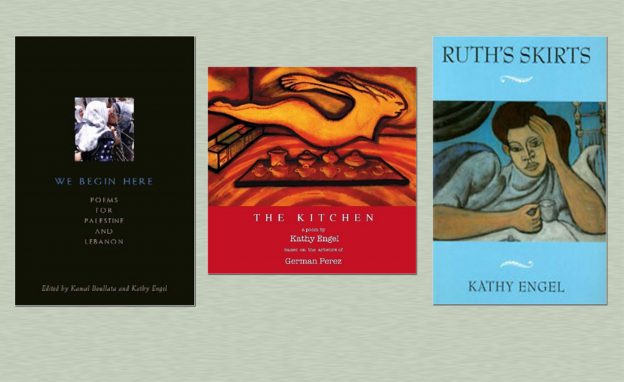 Eyechart, with art by Ellen Driscoll

The Kitchen: with art by German Perez, Lulu.com

Journals and Other Publications (a selection)

“Where I Live” – The East Hampton Star, reprinted by the Boggs Center

“Return (Etheree)” – Split This Rock Poem of the Week

“Family and Spirit” – The Wide Shore

“I Will Not” – Split This Rock Poem of the Week

“Gratitude” | “After the Storm, Praise” | “How the Light Gets In” – Beloit Poetry Journal/Split This Rock Chapbook, 2012

“Amends to Parts of the Body” – Women’s Voices for Change

“Little Disturbances, Enormous Change: Remembering Grace Paley and the impact she had on literature, activism and many generations of women and children.” – The Nation online

“What could the title possibly be.” Border Lines, Poems of Migration. Ed. Mihaela Moscaliuc and Michael Waters. Penguin Random House. 2020.

“Now I Pray.” What Saves Us, Poems of Empathy and Outrage in the Age of Trump.  Ed. Martín Espada. Evanston, Illinois: Curbstone Books/Northwestern University Press, 2019.

“When I Die.” The Lake Rises: poems to & from our bodies of water. Eds. Brandi Katherine Herrera and Lisa Wujnovich. New York:Stockport Flats, Witness Post Series, 2013.

“I Will Not.” Liberty’s Vigil, The Occupy Anthology: 99 Poets among the 99%. Eds. Karla Linna Merrifield and Dwain Wilder. New York: Foothills Publishing, 2012.

“not there” For the Crowns of Your Heads: A poetry chapbook. New York: Poets for Ayiti, 2010.

“Conversation with Heaven.” A Memory, A Monologue, A Rant, and a Prayer. Eds. Eve Ensler and Mollie Doyle. New York: Villard, 2007.

“The Hamptons.” Women on War: An International Anthology of Writings from Antiquity to the Present. 2nd ed. Ed. Daniela Gioseffi. New York: The Feminist Press at CUNY, 2003.